Lux’s investment in Blockstack’s Series A and Token Offering #

This piece initially published Dec 2017
I first heard of Bitcoin in 2013. While today’s macro political environment throws one huge story after another, in 2013 large black swan events were still … well, black swan; rare. One of these events had just occurred: Over levered banks in Cyprus banks had rapidly declared insolvency amidst a global recession. The EU and IMF were racing to structure bailouts, including freezing residents’ accounts and tapping into them as part of the process. Cyprus residents had lost faith in the local currency, Euros, spurring large purchase orders (from both domestic and globally aware international buyers) of a little known digital currency: Bitcoin. The bailouts in Cypress led to a large spike in demand for Bitcoin leading to a jump in price leading to mainstream press, for the first time, picking up and reporting on the nascent technology. Sitting in Potrero Hill, San Francisco, I first read about Bitcoin on this CNN article.

While reading this and my subsequent wikipedia blackhole, two things jumped out to me:

Hungry to fill in my gaps in Econ 101 and dive deeper into the rabbit hole of Distributed Systems and Byzantine Generals I went back to the one place I had confidence could help me, Stanford. There I found myself teaching what ended up being the first University level course on Cryptocurrencies, ever. Drawing from my years toiling in Computer Labs at Stanford the majority of the course covered algorithmic analysis of the Bitcoin protocol. I proposed to the students a mission of building a vocabulary for the most basic “atomic units and primitives” of blockchains and how — under various implementations — these could be perturbed with insight to properties the resulting chains would have. In 2013 it was often the case that the air in Bitcoin conversations would be sucked out by speculators bantering “holding” tips. But back then, the students more so than I, developed a thesis in blockchains as an emergent architecture to decentralize various pieces of internet infrastructure: combining sufficiently difficult compute problems, novel currencies, and existing (centralized) use cases.

Fast-forward 3 years to 2016 and we’d held onto this thesis at Lux without meeting a team directly focusing on this point of attack. We’d observed the space as cautious skeptics, ready to invest if the right technology and team came — but OK passing regardless of investor FOMO at various points in the hype cycle. At times we’d get asked “Are you shying away from crypto?”… “Well, no” … “So do you have any crypto investments?” … “Well, again, no…”

I first met in Ryan and Muneeb in 2016 via my partner Bilal who was an early angel in the company since they’d first come out of YC as OneName, in 2014. The two Princeton Computer Scientists had spent the following years building beyond OneName’s initial product (a decentralized DNS), to enable a system of architectures that would allow anyone to create any sort of decentralized web application. The internet, almost by happenstance, had become unilaterally client-server centric. Ryan and Muneeb launched Blockstack to change that.

It’s worth taking a moment to discuss exactly the reasons why it’s an interesting and fruitful endeavor to invest in a team building an entirely new internet. Without going into the technical details (see the video presentation below for greater depth and context), it suffices to give the following bullets : 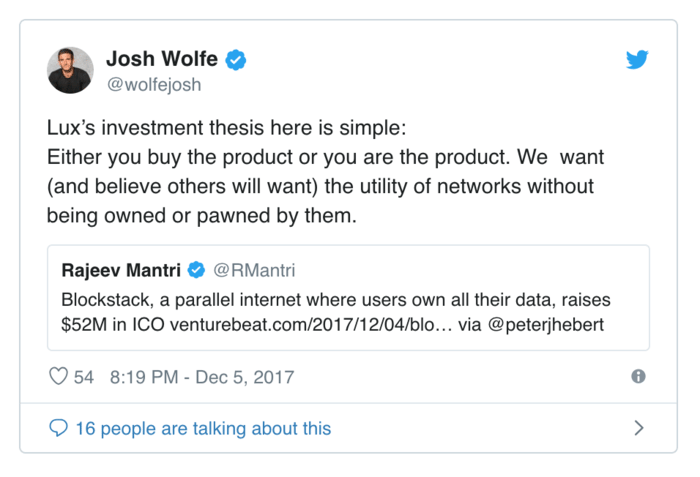 With that, I’m proud to finally announce Lux’s participation not only in Blockstack’s Series A in 2016, shortly after I first met Ryan and Muneeb, but also our doubling down in the most recent Token Offering during which the company raised $50M. Building an entirely new internet is an ambitious, audacious, goal and one that we candidly could never have suspected we’d arrive at when we first started reading about Bitcoin post Cypress. That said, it’s one that we’re proud and excited to back, and simply put — a mission, that if successful, we see as reshaping much of the global economy. Welcome to the Lux family Muneeb, Ryan and the entire Blockstack movement!

This piece initially published in Oct 2017 Complexity rears its head across startups and Fortune 100s alike. It’s unbiased in its applications, and often crippling in its outcomes. The consequences of the future are coming at us faster... Continue →